Hot and Cool in Jacmel 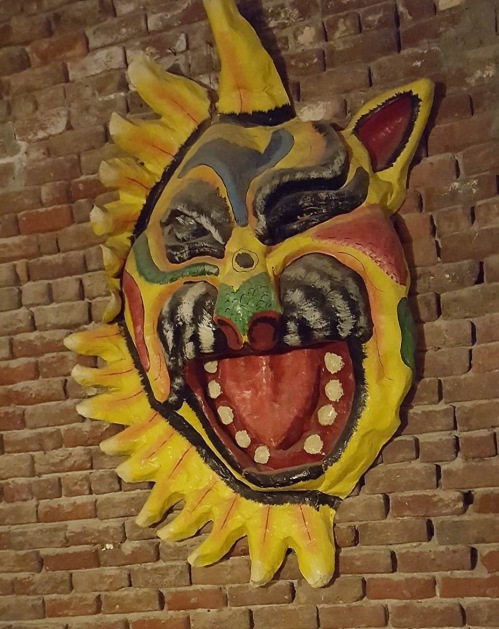 A magnificent papier-mâché mask hanging in the lobby and dining area of the Hotel Florita. 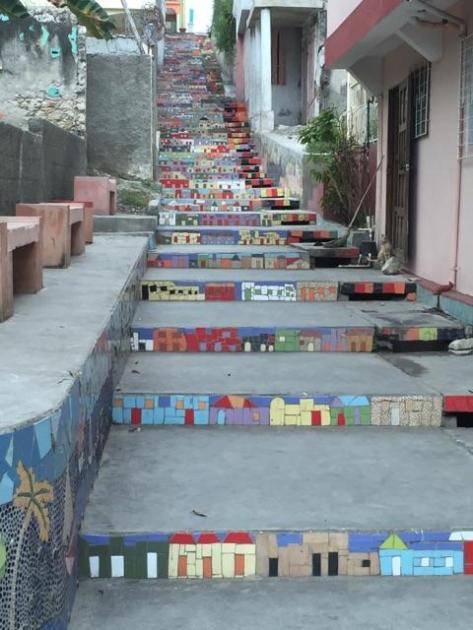 I’m writing this post perched on a canopied four-poster bed that rises so far off the floor that, at 5’4″ tall, I either need a running start and a leap, or a chair to climb into it; Ive opted for the chair. The yards of thick mosquito netting that normally drape down from the canopy are now piled high atop it, as we’ve learned the hard way that it’s an excellent way to repel ventilation, as well as bugs.

My husband knows and tends to indulge me in this fascination I have for hotels with “character,” along with all things historical and vintage. Back in 2009, for example, when we were getting ready for a trip to Peru the following summer, I became enamored with the Gran Hotel Bolivar in Lima–named interestingly enough, for one of Jacmel’s most important 19th Century guests (see historical note below).  The Gran Hotel Bolivar is a real throwback constructed in 1924, which, in its heyday, had hosted the likes of Orson Welles and Ava Gardner. And the rate of $35.20/night total for two rooms certainly didn’t hurt. I remember the four of us walking into the lobby, with its cathedral ceilings and threadbare carpets, its old-world formally trained and attired staff showing us to our (gigantic) rooms, each with faded bedspreads and claw foot tubs attesting to their spooky, antique glory. Long story short, the whole thing turned out to be a little too Norma Desmond, even for me, and we hightailed it out of there, enveloped in a few chills.

Chills however, have been at a premium these past two days in Jacmel; here at the historic, non-air conditioned Hotel Florita, things have only been cool in the most figurative sense. Since I was basically left to my own devices in planning our family trip to Haiti, I couldn’t resist the Victorian grandeur of the Florita, so with a few clicks on an online travel site, I booked the eleven of us on a journey back to 1888.

The town of Jacmel, like its signature hotel, exists in a state of elegant, if somewhat faded splendor.  Founded first by the Spanish, and then later taken over by the French in the 17th Century, Jacmel was a thriving, wealthy shipping port, and the first city in the Caribbean with electricity.  Jacmel owes much of its beauty to its French Colonial architecture, and a walk through its streets will leave you with a distinctive New Orleans vibe.  Today, it’s basically a large artists’ commune, best known for making miracles with papier-mâché.

The Florita itself is the definition of shabby chic, although I wish it were less self-indulgently so. While the entire space is practically a gallery walk, and the staff and the lobby/restaurant/bar area are all wonderful, certain details are hardly ideal, if not lacking altogether. Replacing missing doorknobs, shower heads, or refining obvious room repairs so that they’re more aesthetically pleasing would take nothing away from the hotel’s charm, and would add significant value to guests’ overall experiences. Well, that and some step ladders. 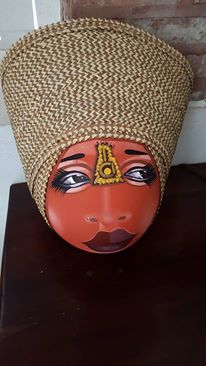 I’ve named this mask designed by Jacmel artist and activist Charlotte Charles, Miriam (for Miriam Makeba). She is my one retail indulgence so far. Her head is actually a large, dried out gourd. According to Charlotte, these masks are inspired to protest colorism in Haitian society, and to celebrate the beauty of all shades. 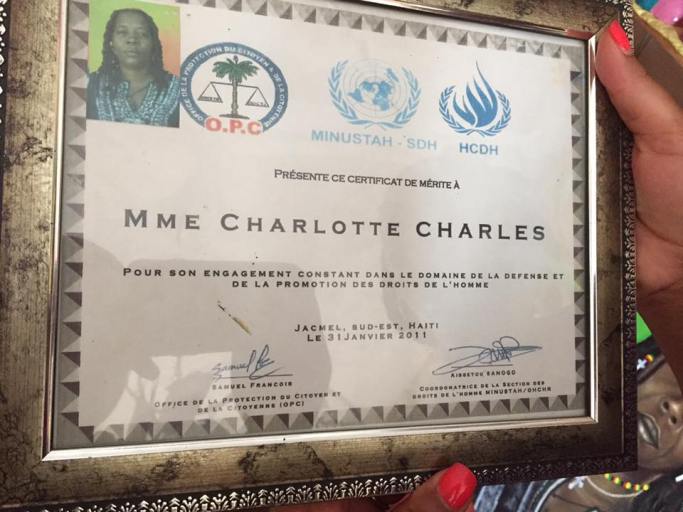 Meeting Charlotte was one of Jacmel’s best experiences. She is an incredible artist and human rights advocate who was jailed three times for standing up for women’s rights in the camps of post- 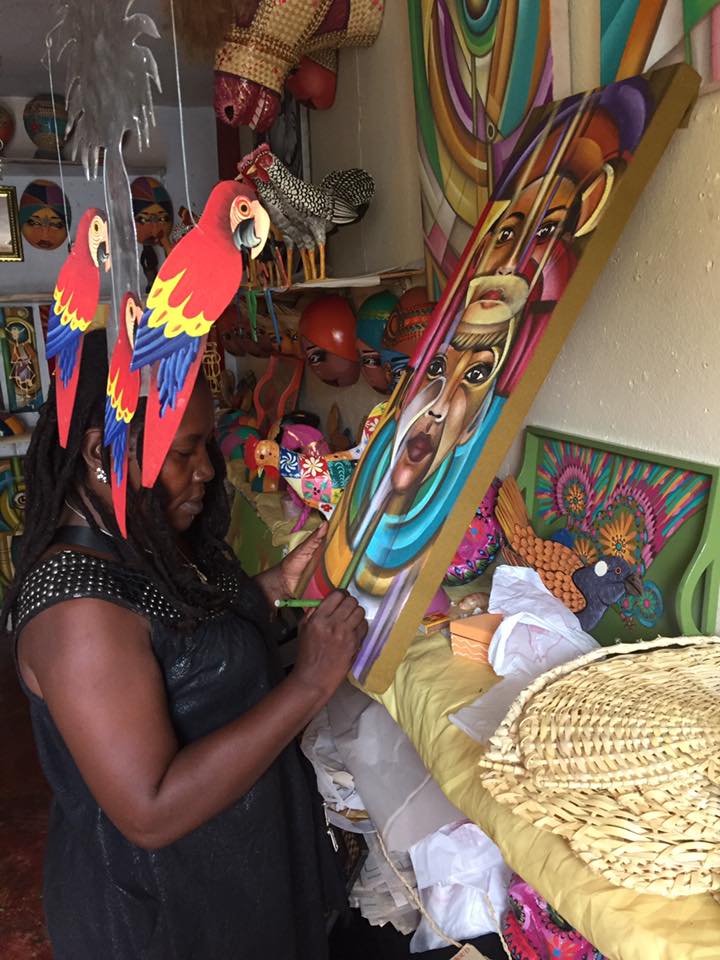 * Historical note:  Jacmel played host to Simon Bolivar, arguably its most famous guest ever, in 1816, while he was trying, unsuccessfully at that point, to liberate South America from Spanish Colonial rule.  Having been rejected by Jamaica, Haiti, then governed by Petion, welcomed him with open arms, and secretly provided him refuge, along with ships, weapons, ammunition, and even a printing press for propaganda– all under the condition that he would free all slaves in the areas he managed to liberate.  In fact, Venezuela’s flag, whose blue and red stripes were inspired by those of Haiti’s own, was designed in Jacmel.  While Bolivar kept his promise to free South American slaves, a debt black South Americans owe to Haiti, he also ultimately refused to recognize the legitimacy of his former benefactors, in deference to Europe and the United States.

Hiking to the Bassin Bleu Falls

As my Dad, uncle, grandfather, and I tumbled through the rocky municipal river running through Jacmel, I finally knew what my gym shirts felt like when I threw them in the dryer on its highest setting. But even as the uneven terrain catapulted my head into the roof the our van every ten or so minutes, I still couldn’t manage to avert my gaze from the awe inspiring scenery of the Haitian mountainside. The hike to Bassin Bleu is lined with tropical fruit trees and towering palms that provided occasional shade during our trek towards the waterfall. From high-hanging deep brown cocoa beans to shy branches whose leaves receded at the slightest touch, the wonder of Haiti’s flora never failed to provide me with an incentive for moving forward. 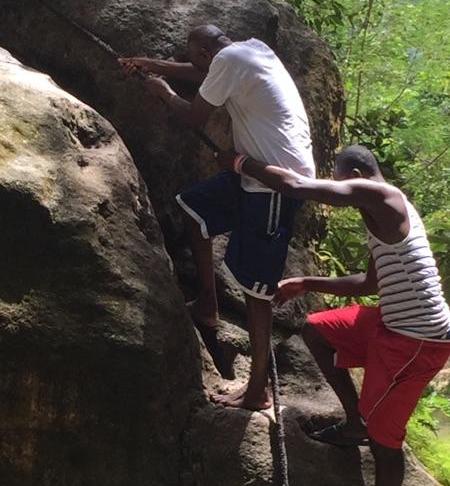 Grandpa with one of our guides

Hiking in the heat.

A goat family along the trail 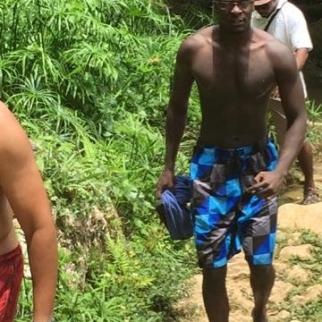 When our guides finally announced that we had arrived at the waterfall spring’s entrance– a steep cliff with a rope to repel down on–my first thoughts were to question Grandpa’s safety. But to my surprise, my grandpa’s rigorous workout regimen and my slight fear of heights allowed him to complete his twenty or so foot descent more easily than I did. But spending those two interminable minutes suspended parallel to a cliff face was a small price to pay for admission to what would turn out to be the most beautiful swimming pool I had ever seen. Although the recent heavy rain had rendered the water a deep green as opposed to its usual crystalline blue, it didn’t lessen the relaxing effect diving into the cool water had on me, and doubtlessly on everyone lucky enough to experience it. 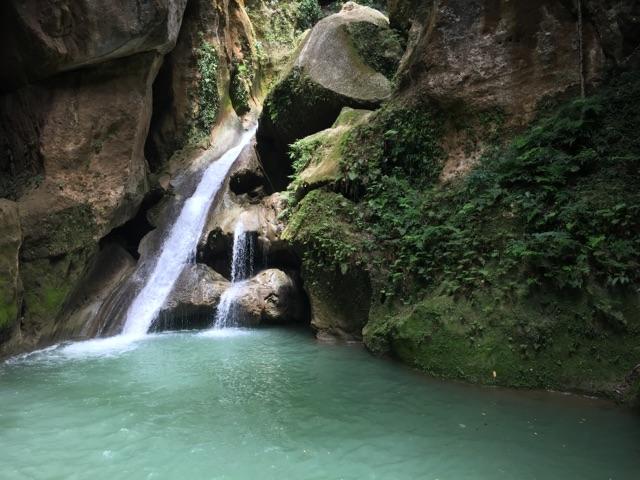 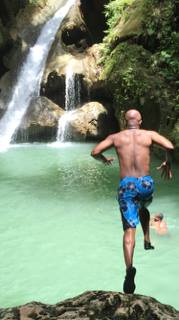 6 Comments on “Hot and Cool in Jacmel”