Losing My Religion in Madrid 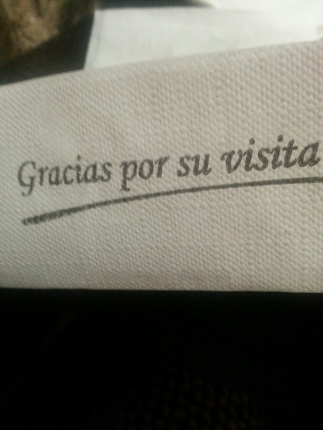 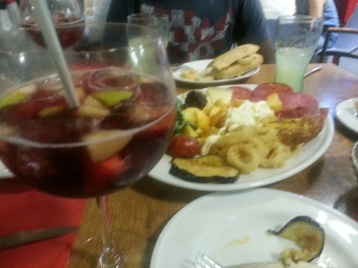 Churros con chocolate from a street fair vendor. Probably not the best but OK. Chocolate was super thick, strong, and not too sweet. 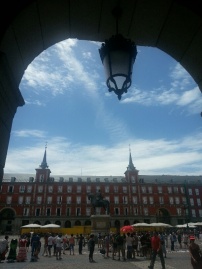 Yes, to smell pork; to eat of the habitation which
your prophet the Nazarite conjured the devil into. I
will buy with you, sell with you, talk with you,
walk with you, and so following, but I will not eat
with you, drink with you, nor pray with you.
—The Merchant of Venice (I.,iii)

We’re sitting in a taberna in the middle of a two and a half-hour walking tour of Madrid when the REM song in the title comes on. This stop is a welcome and well-engineered break that benefits everybody: Tour participants get to use the facilities and cool off from the intense heat, and the tour guide gets to gently upsell the not-so-free tours to his captive audience . The upsell is part of the deal, and I don’t mind it so much. I became a fan of these “free” or pay-as-you-wish tours in Paris recently, and found the value of the overall walk and information to far outweigh its minor commercial aspects. Some in our group do end up buying offerings which include everything from a literary tour to a pub crawl , while others opt for a quick beer or Coke. Of course, the taberna itself benefits the most from those who peruse the rest of the menu in the process, which at least suggests the possibility of returning later for a platter of paella or some late-night tapas. T and I are traveling with our sons and his sister, and while we sip a little water from our bottles, we don’t eat, and find the prospect of doing so a little daunting, as we’re typically not big pork consumers…more on that later. As mentioned before, I’m taking all this in to the incongruous soundtrack of Michael Stipe singing “Losing My Religion”, and the disconnect seems stark–at least at first.

About an hour earlier, we had met our guide, Sebastian, at the Plaza Mayor under the tell-tale red umbrella of Sandeman’s New Europe Tours. The first thing Sebastian did after the preliminary niceties was to inform us that this was going to be a history-centered tour, actually offering an opportunity for the history-phobic among us to opt out. When no one did, he started off with a quick survey of the geographic origins of our group. We were pretty diverse, representing Turkey, Flanders, Germany, The UK, Canada, and a number of US states. Unbeknownst to us however, with this basic survey, the history lesson had already begun, as Sebastian used our home countries to illustrate the reach and/or influence of the Spanish empire in its heyday. Indeed, looking at Madrid in relation to what I’ve seen of its former colonies in the Americas felt to me like meeting a friend’s grandmother for the first time, and suddenly realizing where she got her smile, or that cleft in her chin.  This part of the talk was quickly followed by a brief overview of Madrid proper, including the revision of the city’s boundaries and its illustrious past as a tax haven peopled by what the rest of Spain referred to as gatos or wall-climbing cats (read: social-climbing hicks).

Today, the descendants of these so-called gatos take tremendous pride in their madrileno heritage, a heritage that, according to Sebastian, an individual can only claim if he, both his parents and both sets of grandparents were born in the Spanish capital. Poseurs are frowned upon.

Such triage is a recurring theme in early Spanish history, and it isn’t long before a pattern emerges; I soon find myself appreciating our guide’s good-natured honesty when presenting his country’s problematic past. When we stop in front of a flamenco club, for example, Sebastian takes an opportunity not only to encourage us to see the show (it’s a good one, he suggests– i.e. not so tourist trappy), but to divest us of our flamenco mythology. He points out that flamenco music and dance, along with the popular image of fan-waving, crimson-lipped women, their heels stomping seductive percussion to a solo guitar, would never have been accepted as part of Spain’s mainstream culture by anyone considered respectable. Flamenco was gypsy music, and was therefore worthless and discreditable by association. He really gets my attention when he likens it to jazz and blues in the U.S., emphasizing that it was the music of an oppressed minority, born of suffering and hopelessness, before it emerged as the signature sound of a nation. To make matters worse in the eyes of the culture police, these gypsies (the Romani people) weren’t even genetically Spanish, having gradually made their way into Southern Europe from their ancestral roots in Northern India. This portion of the tour immediately brought to mind our encounters with gypsy camel herders while driving through Rajasthan, India last summer, two seemingly disparate episodes proving once again how connected people truly are.

And speaking of connections, it’s hard to ignore just how culturally and socially diverse Spain was before the Inquisition with its accompanying murderous hysteria and paranoia.  Unlike the bitterness expressed by Shylock above, who, as a Jew, is very much a social pariah in Shakespeare’s Renaissance Venice, things point to relatively friendly coexistence  among Madrid’s various ethnic groups for quite some time before things went south. This inter-connectedness and tolerance, particularly for its Jewish and Muslim inhabitants is written all over Madrid’s historic architecture, which reflects people’s tendency to hire the finest builders and craftsmen, without regard for religious affiliation, when that was the  acceptable thing to do.

Things of course did change, which leads me back to the taberna, and our lunch. It doesn’t take long for a visitor to realize that it’s going to be very difficult to eat in Madrid if you can’t eat, don’t like, or would prefer to avoid pork. Huge legs of cured pork hang from virtually all eating establishments, and one of the most popular restaurant chains here is aptly named Museo del Jamon. Seafood comes in a distant second, but I’m going to guess that it’s far more prominent in Spain’s coastal cities; in land-locked Madrid though, pork rules. We’re not strict pork abstainers: I don’t mind it, the boys like it a lot when they can get it, and T. only spurns pork that’s not bacon. That being said, I was still struck by the sheer magnitude of pork prevalence in this city. It turns out that even this has an unfortunate historical connection. As Muslims and Jews were driven out of Spain via the ethnic cleansing process of the Inquisition, those who were left, many of whom chose to convert in order keep some semblance of their lives and/or property, were often subjected to “tests” to gauge their comfort-level with pork products.  So for the zealous, or even just the fearful among the general citizenry, what better emblem to use to display one’s Christianity (and therefore ethno-religious “purity”) than a prominent display of pig parts?  And so the idea stuck.

Our tour of Madrid is full of such uncomfortable truths, but I think these stories hold value in the way they force us to confront the many times we, as human beings, have chosen to relinquish our common decency for convenience, flag, or church, and wind up losing all that’s truly sacred in the process.

Scenes from our day trip to Segovia:

Segovia from the top of the Roman Aqueducts.

Two of my guys caught photographing me from overhead at the Roman aqueducts in Segovia.

Inside the cathedral at Segovia 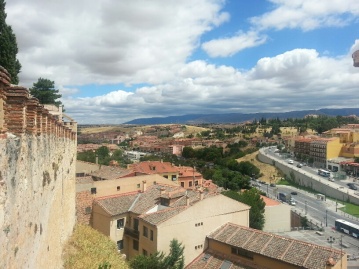 Segovia’s central square from my perch on the aqueduct.

← One Last Love Song to My London Summer
Homeward Bound →