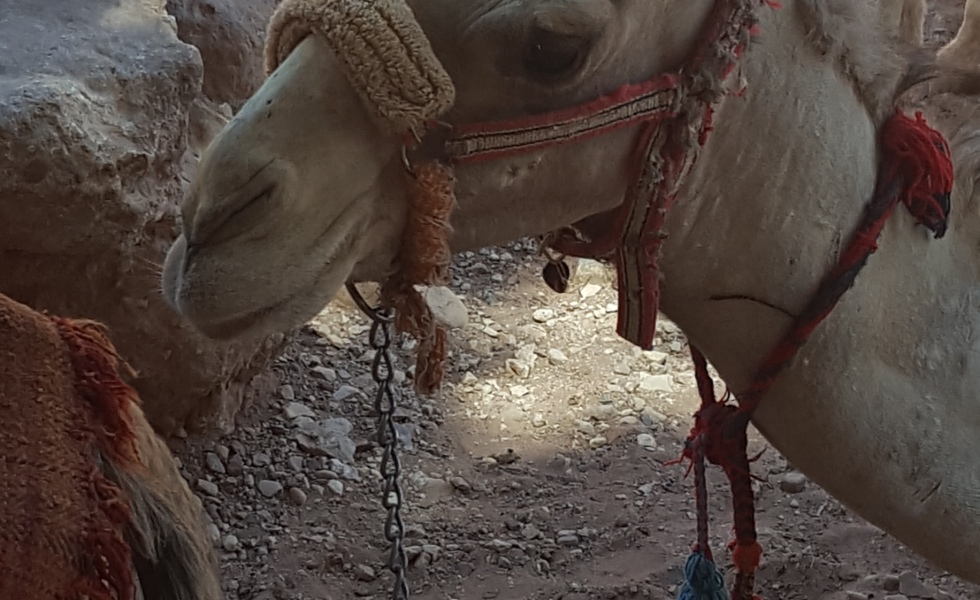 Checking in luggage is the rookiest of rookie travel moves.  I did it, and paid for it. Blindsided by an overzealous agent at the EgyptAir counter at JFK, who insisted on weighing my prized koi fish orange spinner carry on, and finding it five kilos overweight (EgyptAir has a strict 8-kilo carry-on weight limit), I relented. I did so instead of redistributing my stuff with T’s; instead of putting on a couple more layers of underwear as outerwear; instead of doing anything to avoid parting with my bag–especially with a connecting flight, and especially, as it turns out, on EgyptAir.

Upon boarding, of course, I only to had look above my head from the 38th row in outraged fury at the population of clearly overstuffed and over-sized bags that had managed to make it onto the aircraft unweighed. Needless to say, eleven hours later, after disembarking in Amman from our connecting flight from Cairo, I found myself standing at the carousel like a jilted bridegroom, waiting a little too long, and with a little less hope, each time I looked toward the door that promised to deliver my beloved.

Short on time since we would only be in Jordan for three nights, we made our way to Petra anyway, accompanied by our incredibly patient driver, Ahmad.  While the airline finally found my bag the next day, they don’t deliver, and I would have had to drive about four and a half hours to Amman to retrieve it, so for three nights, I literally had the clothes on my back, a leggings/skirt combo I’d impulsively stuffed into T’s carry-on at the last minute, and later, two pairs of camel motif harem pants I overpaid for at the Petra bazaar (another rookie move).

We got our first glimpse of Petra, the ancient “lost” city, the final world wonder to cap off our list–and our primary reason for visiting Jordan– by the light of the stars above and candlelight below. The 17 Jordanian Dinars(JOD) each we paid for Petra by Night was worth it, if just for the experience of being in that ancient space in a blanket of darkness that was almost as spectacular as the candlelight display. Once inside the Treasury area, there was a performance of vocal and instrumental Arabic music, which added to the sense of mystery and mysticism. 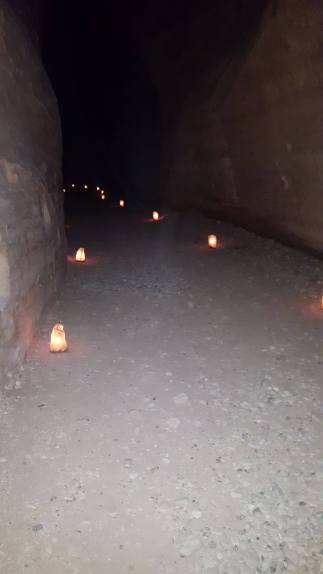 Footpath leading up to The Treasury during Petra by Night.

Petra in the daylight hours doesn’t disappoint either. This time we were able to enter using our Jordan Passes (highly recommended), which cover the cost of Jordan’s entrance visa plus a number of other attractions around the country. Petra can be a grueling walk or hike, depending on how much ground you want to cover, so we started early (around 7:30 AM) as is usually recommended, though not as early (6:00 AM) as some insisted.  Staying near the Petra Visitors’ Center in Wadi Musa is the best way to facilitate an early start, which is great for having the site to yourself–ahead of tour groups, cruise excursions, and school trips. We booked an overnight stay at Sharah Mountains Hotel just up the hill from Petra. Owned and operated by a group of affable brothers (say Hi to Mahmoud and Khaled for us if you go), its rooms are sparkling clean, include a hearty breakfast, and best of all, they offer free trips to and from the Petra Visitors Center. 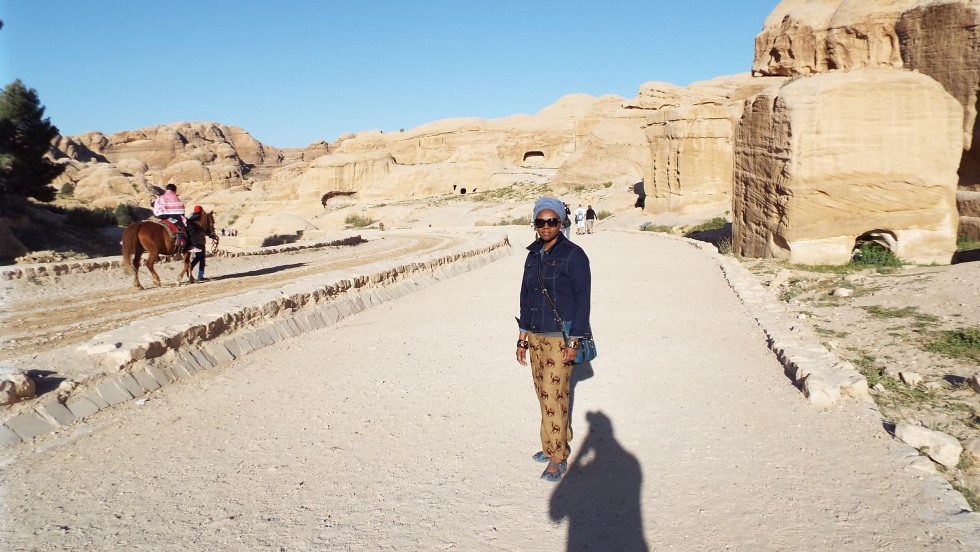 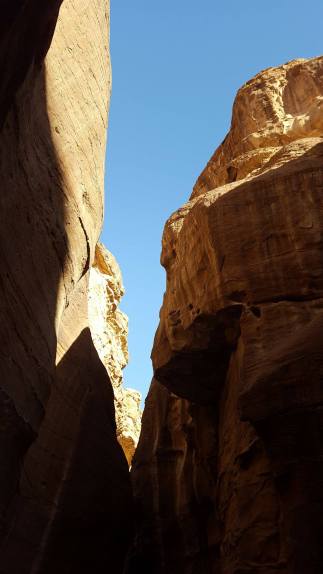 Our day in Petra started off well enough, including repeatedly and successfully fending off the army of Bedouin (or possibly Gypsy, as one acquaintance remarked) vendors who practically insisted that we ride their particular conveyance–carriage/donkey/camel–through the site, and up to the Monastery. By late midday however, we lost any conviction we’d had to walk the long way back to the visitor’s center and ended up hitching a ride on two camels, which, based on the exorbitant cost, must’ve been  Petra’s version of UberBLACK.  We got a pretty cool picture out of it though, and camel riding turned out to be a lot more fun and manageable than I’d imagined for a shrimp like me, who’s also scared of heights.

From Petra, we took a 90 minute taxi ride to the Wadi Rum Desert for some “glamping” and a taste of Bedouin hospitality at Attallah Alblwi’s Bedouin Lifestyle Camp. Let me start by saying that I am not into roughing it, especially under the aforementioned luggage-less circumstances, but this was a singularly unforgettable experience.

Saying goodbye to our hosts at Bedouin Lifestyle Camp.

Wadi Rum is the famous backdrop for films like Lawrence of Arabia, The Martian, and the two most recent installments of Star Wars, so if its coral colored sands look familiar, that’s why. To call it a spectacular landscape borders on understatement. Our stay began with a nearly three-hour tour of the desert’s highlights, which include a dune for sand boarding, and a few vistas that will be recognizable to serious film buffs. From there, it was a brief orientation to camp, which meant getting our tent assignment and checking out the shared (and remarkably clean) bathroom and shower facilities. Then it was a short drive out to view the sunset, followed by an authentically prepared Bedouin meal of chicken, rice, vegetables, soups, and salads shared with a couple dozen other guests.  All the while our hosts went out of their way to make us feel welcome, even capping off the night with a lively musical performance, shisha, and sweet, addictive Bedouin tea.  I left thinking it was easy to see how this sublime setting could make you feel like you’d left planet Earth.

We spent our final day and evening in Jordan briefly touring the town of Madaba, visiting Mount Nebo, Moses’s final resting place, and T was able to take a quick dip in The Dead Sea before we headed into Amman for the night. 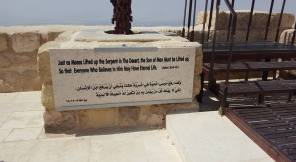 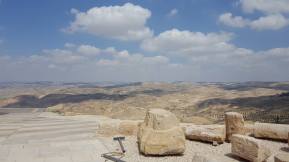 WHAT I LEARNED FROM THIS SOJOURN:

← Shall We Gather at the River?: Gullah Voices and Echoes
The Arab Spring Break: Egypt Edition →