THE ORIENT EXPRESSED: Xi’an and the Terra-Cotta Warriors

Awaiting our flight to Xi’an, one of our six trips to the airport.

Our guide for the Xi’an leg of the journey is named JC. His English is good, but not as good as Gary’s.   As a former teacher of Ancient Chinese History, he’s quite the scholar and insists on regaling us with everything he knows during the hour long bus ride to the hotel.  The weather today, both in Beijing and here in Xi’an has been extremely hazy and overcast. Thankfully, once we get to the hotel, our time is ours.

We spend the afternoon and evening walking around Xi’an, which is notable for having the best preserved city wall in all of China, for its drum and bell towers, for its vibrant Muslim quarter, and apparently, judging by the pointing, staring, and pop-up amateur paparazzi behavior, citizens who get out even less than those Beijing…Anyway, we walk quite a bit, as Xi’an is a walking town, but the air quality makes it pretty tough. Much has been reported about pollution and air quality in China, but it hasn’t been an issue for us until now. The only respite we get is in the Muslim quarter, the air in which for whatever reason seems a bit fresher. The district itself is a big street market selling all sorts of pastries, confections, noodles, meat kabobs, and other sundry edibles on a stick. I wasn’t brave enough to taste anything but I feel like a wuss, so I may return for some fudge (which looked a lot like Haitian douce).

In the evening, we end up at this restaurant called The Greenery Cafe, which we pick mostly because of its English menu and accompanying pictures. We opt for their $20pp fixed price dinner option, and make what we thought were our dinner selections from the proffered choices. For T., chicken served with fried rice; for me, filet of sole with black pepper pasta. First T.’s beer comes out, oddly followed by a cup of lemon tea that neither of us ordered, (hmmm…). This is quickly followed by the dessert plate, (yes, that’s right) complete with ice cream! A few seconds later, the salad shows up, along with two soups, which again, we hadn’t ordered; this was quickly followed by the two main courses and one cappuccino! Within five to ten minutes, the table is essentially jam-packed with everything offered on the prix fixe menu– the whole affair is like a Saturday Night Live skit. I might’ve thought they were trying to get rid of us quickly, had the table next door not been served in a similar fashion. Besides, they seemed genuinely pleased to see us laowai (I could have sworn I saw the chef pop out and take a peak), and our server was quite sweet, attempting to speak to me with my limited mandarin. This is however, one for the books.

This is our only full day in Xi’an, and today’s excursion is a trip an hour outside the city to see The Terra-cotta Warriors, the life-sized (and larger than life) army that the first Qing Emperor had crafted in order to protect him in the after-life. You may have seen them brought to “life” by Hollywood in one of the sequels to The Mummy. This is a highlight of any trip to China, and one which we’ve been personally anticipating.

JC comes to collect our group after breakfast (where we saw at least six Black ladies from Chicago!) and we head out, but not before a stop at (you guessed it) The Terra-cotta Warriors Factory Store! Here, we get to pose in TC soldier molds for goofy pictures, and get a spiel about the army ranks of the soldiers and how we can differentiate them.

Ultimately of course, we are there to shop, so shop we must. One salesman attempts to sell me a life-sized replica of a soldier for two grand (Dude, really??). I quickly sic him on T., calling him the “general” in the family. This salesman’s no idiot though so he comes back to me in a few seconds. I tell him frankly that $2000 US could probably pay for a semester at a small state university so spending it on a rather intimidating looking garden gnome is definitely out of the question. Besides, I’ve done my homework, so I know that there are guys selling desk-sized box sets of these for peanuts at the actual museum. 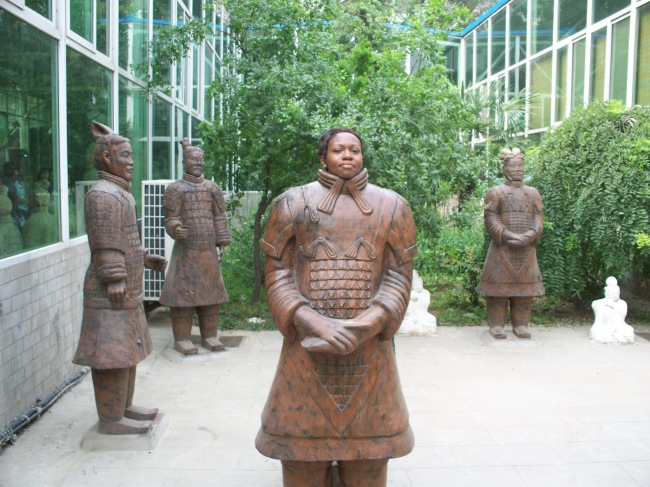 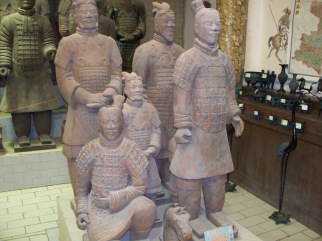 These life-sized warrior reproductions can be had for a mere $2,000 US. 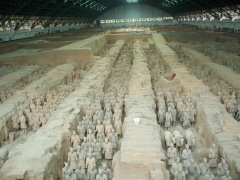 This is an airplane hangar full of soldiers.

Terra-cotta Warriors, in spectacular formation, as they were buried with the Emperor.

We finally make it out of there and to the museum which, like everything we’ve seen in China, is built on a massive, impressive scale, and is still growing. It consists of three exhibits, with the first one being the largest, and most spectacular. The “surviving” soldiers are still lined up in battle formation the way they were buried with the emperor centuries ago. There are generals, officers, common soldiers, standing archers, kneeling archers, horses, chariots, and charioteers, and none of them has the same face or facial expression. This is a truly mind-boggling sight, not to mention, one of the greatest displays of hubris I can imagine. The irony is pretty rich though when you think of how the descendants of the poor people this guy victimized to build his armies, both real and fake, are now benefitting from the huge influx of cash this discovery has brought into their communities since its discovery in 1974. I’m by no means suggesting that this somehow makes up for criminal acts this emperor perpetrated, but this was tantamount to hitting the lotto for some people for whom life was pretty hard.

We head back to the bus after another lackluster group lunch, and JC threatens to take us to a traditional embroidery factory; this time somebody puts his foot down. Among our traveling companions is Dick, a very spry and hilarious retired gentleman in his 70s or 80s, who is the patriarch of eight family members in our group from San Francisco. I don’t remember if I mentioned that we’re the only Easterners in our tour group…. Anyway, Dick asks JC if we can take this embroidery factory thing to a vote, and we unanimously vote to skip it. Whew!!…Later, Dick tells T., who has easily been the most reluctant shopper, that he owes him 10 bucks (Chinese) for saving him from the embroidery factory:). Tomorrow, we’re bound for Chongqing, and the seafaring portion of our journey. Hopefully, there’s Wi-Fi on the boat.