Tales of Beheaded Bishops and Despondent Divas in Montmartre

Montmartre is probably best known for its magnificent Sacre Coeur Basilica, and for good reason. It’s gorgeous inside and out, and it affords pilgrims worldwide an absolutely breathtaking view of the city. What I found out today, though is that Montmartrois (residents of Montmartre) really can’t stand the place. Long story, but suffice it to say they liken it to the Disney Castle.

T and I learned this today on a great pay-what-you-wish Discovery Walks guided tour of the neighborhood. These are young, mostly native Parisian guides who take visitors on quirky, yet educational walks throughout the city. They work solely on tips, and at the end, you can pay them, or not (really). I don’t know how anyone could have the heart to stiff them though; if our guide, Marie, is any indication, they’re more than worth the suggested 10-14 euro gratuity.

Our Montmartre guide. Marie, hard at work with the Sacre Coeur in the background.

Anyway, let’s start with St. Denis, the beheaded first bishop of Paris. Here he is: 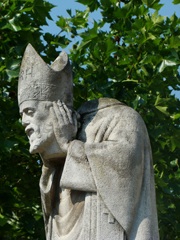 St. Denis taking “things” into his own hands.

Sentenced to death by the Romans in the Third Century AD, he requested crucifixion as his mode of execution. According to legend, his executioner was supposed to crucify him high up on Montmartre hill, but he didn’t want to bother with the climb, and instead decided to behead him. Miraculously, St. Denis retrieved his head where it fell (there’s now a church there to mark the spot), carried it up to Montmartre, and crucified himself.

Another Montmartre legend was Dalida, femme fatale and diva deluxe:

Any Haitian girl of my generation who grew up in a partially French speaking household probably had a mother like mine who listened regularly to French pop via hi-fi records or 8-track tapes when she did the household chores. Because of this, Dalida is as familiar to me as any American popular artist from the 70s and 80s. Apparently, after having had three husbands who all committed suicide, not to mention a very controversial affair with former French president, Francois Mitterand, Dalida, or “the Black Widow” as people began to call her, committed suicide herself. Her mansion still stands as the most expensive house in Montmartre, and pilgrims stop by pre or post-prayer at Sacre Coeur to rub the bust of her bust for good luck in love. Anyone else notice some irony here?

Dalida’s bronzed boobs polished to a high sheen from all the palming.

Movie poster we saw on the Metro heading to Montmartre. Another one for the “you can’t make this stuff up” file. 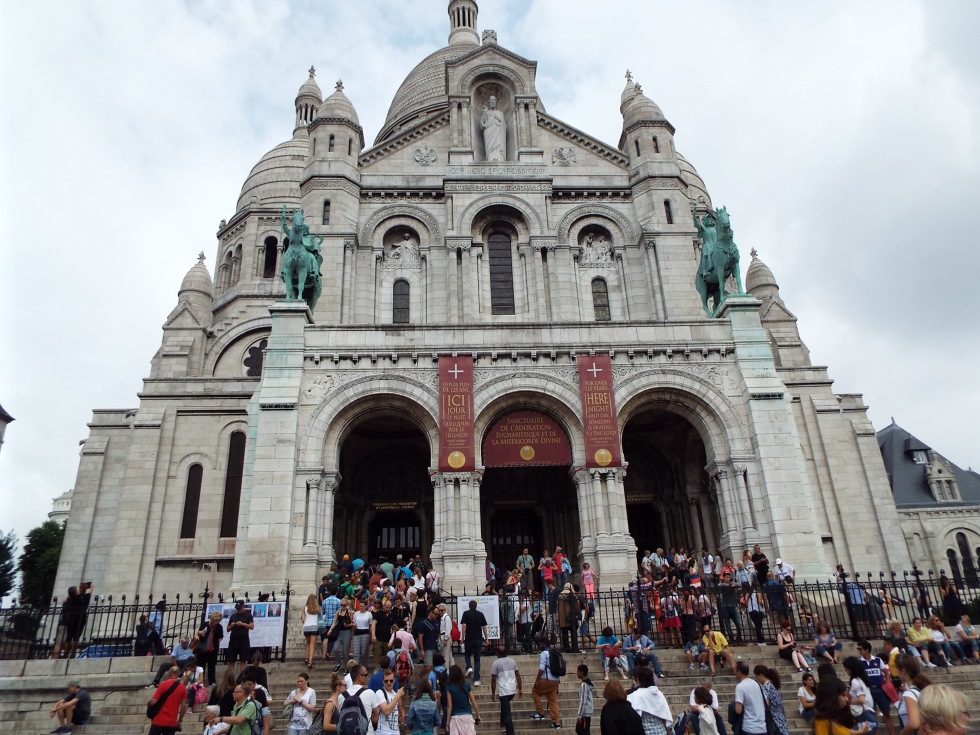 The Sacre Coeur , mocked and maligned as the Disney Castle by Montmartre natives and locals.

Part of the crowd in front of the Sacre Coeur

The Moulin Rouge, located at base of Montmartre, hosts cheesy Vegas type shows for 185 Euro pp. We opted for pics out front and Toulouse Lautrec paintings at the Musee D’Orsay.

← Bonjour, Paris!
What I Learned From This Sojourn: Paris Layover Edition →